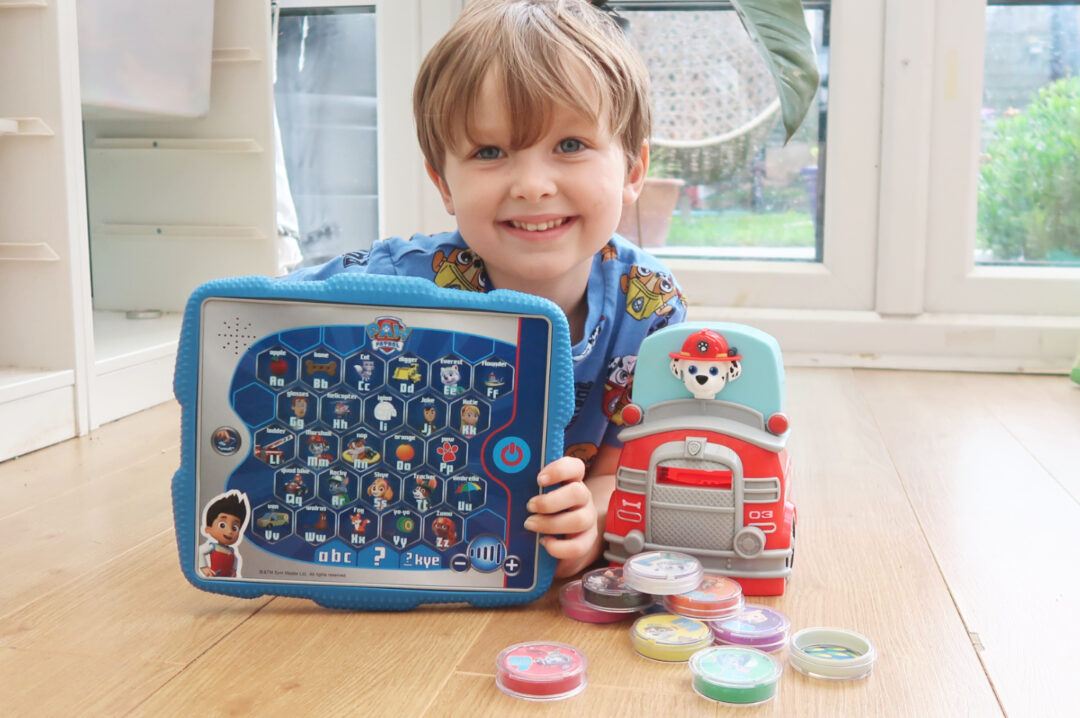 Inside: A review of Ryder’s Alphabet Tablet and Count with Marshall. Includes Press samples.

William has been a fan of Paw Patrol for going on 3 years now. There is something about those pups and their trucks that has him completely hooked!

He has all of the characters and vehicles and plays with them endlessly. It is lovely to see his imagination at play when he gets all of his Paw Patrol toys out.

With him now starting nursery, I need to make sure he is on track with his counting and letter recognition – these things seem to creep up on you, don’t they?

That’s why, I was so excited to be offered the opportunity to review the new Paw Patrol educational toys from Trends! Such a great brand and of course anything Paw Patrol would pique William’s interest and help him learn!

We were sent Count With Marshall and Ryder’s Alphabet Tablet and I kid you not, William screamed when he saw them!

William loves anything to do with numbers so I knew he’d love this. He also loves Marshall and his Fire Truck so it is a really fun way to present the game to little ones.

The truck acts a little like a post box, with the aim of the game being to listen to Marshall as he gives you different instructions.

The truck has 2 modes; number and colour. When you flip the switch to one or the other, Marshall will begin by asking the child to pop different coins through the slot.

There are 10 coins, which are different colours and have different characters on the front as well as the number for that given coin.

On the reverse is also a number as well as a corresponding number of objects. The objects relate to the character on the front, with Everest having snowflakes and Rocky having spanners etc…

If you are in number mode, he will ask your child to find different coins or sometimes he will ask them to post through the correct number of coins through the slot so they can build up to counting to 10.

In colour mode, he will ask them to post different coloured coins through the slot. All the while he will give clues by stating the number of objects on the back to reinforce number too.

What I really love is that if the child hesitates, he will say ‘Never mind, let’s try again’ – it is really important for a child to know that it doesn’t matter if they don’t know the answer straight away.

Count With Marshall is available from Argos priced £19.99

The tablet is designed to resemble Ryder’s Pup Pad and Ryder is the voice that talks you through each of the games. The touch-sensitive screen makes it easy for little hands and the rubber case makes it durable around toddlers!

There are 3 different games to play; Find the Phonic Letter, Find and The First Letter.

Find the Phonic Letter asks the child to find a sound and gives an example word relating to the picture on the tablet. This is perfect for children who are starting to hear sounds but might need a visual clue.

Find is a nice easy game and asks them to find various pictures on the tablet – all the while they are seeing the letter next to each picture they choose.

The first letter asks the child which letter is the first letter in a given word. Each word relates to a picture on the tablet so even if they do not know the answer, they can find the picture and then Ryder confirms the choice and states the sound.

I love the fact that no matter what stage your child is at, the games are accessible to all. If they are more confident with their choices then it will reinforce their knowledge but if they do not know their sounds and letter yet then they will soon learn with each fun game.

Plus, not only does it help with knowledge of the alphabet but it also helps with listening skills as they listen out for instructions from Ryder.

William isn’t particularly strong with his letters or phonics so having Paw Patrol to help increase awareness is going to be a godsend.

Both toys are really well thought out and I know they will help William as he begins to learn about numbers and letters. Being Paw Patrol themed will keep his interest and ensure he pays attention – children learn best when they are interested in the topic.

Both can be found at Argos and don’t forget to keep an eye out for the My First Smart Phone which also focuses on colour and number as well as communication skills and can be found at Very for £10.99.

We were given press samples of the products for the purpose of the review. All thoughts and words are my own.

Have you got sun? THIS is the kind of autumn I lik

Until next weekend 🧡🍂✨ Not entirely sure

I didn’t expect loungewear to be such a popular

Swore I wouldn’t get a Teddy coat. Thought they

Inside: A review of the Meee in a Minute Books - feat. press samples. I love self improvement books. I...