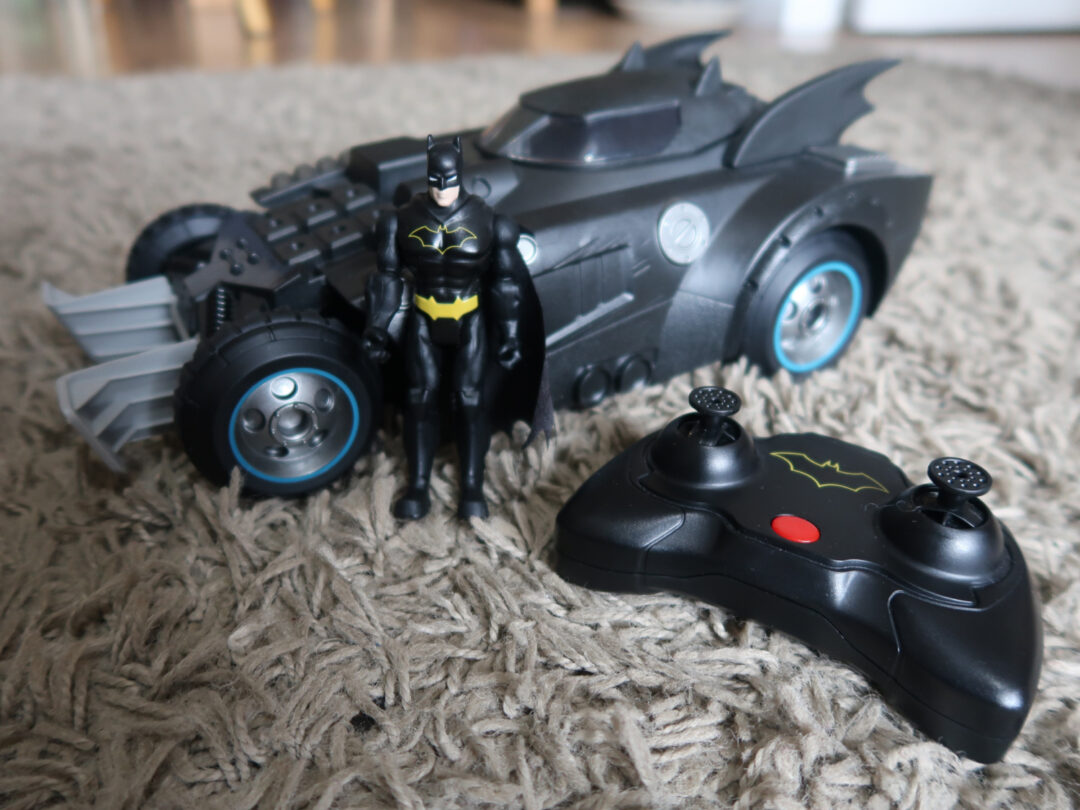 Inside: A review of the DC Batman Mission 3-in-1 Batcave Playset & Batman Launch and Defend Batmobile – including press samples.

Over the last few months, William has discovered Batman and has quickly become obsessed with everything to do with it! When the chance came to review two pieces from Spin Master I jumped at the chance – I knew he would be thrilled!

We were sent the DC Batman Mission 3-in-1 Batcave Playset & Batman Launch and Defend Batmobile.

This is a wonderful playset, William has not stopped playing with it since it arrived. It has 3 levels and 2 sides – one being the Batcave and one being Gotham City.

There are lots of elements of play, with secret blast through walls and stickers to help set the scene.

One of William’s favourite parts is the golden armour that can come off of the mannequin and fit to Batman’s body.

The lowest level is the actual Batcave and there is a petrol pump for the Batmobile, which is sold separately.

Back to the main level and you find a jail – perfect for locking up any of Batman’s enemies should he catch them!

The play set requires AA batteries for the light. This too is dual sides, with one side being the computer system and the other side being part of Gotham City…

Of course, it is the Bat signal.

The set comes with a zip wire. It doesn’t ‘go’ anywhere in particular – you can clip it on wherever you like and let Batman whizz along!

William likes to clip it to the electricity pole. This can swing side to side too – an added extra to the play.

A dumpster in Gotham City adds more detail to the scene.

As do the many stickers. I wanted to take a photo of this one as at first I couldn’t make out where to stick it. So just in case you struggle too – its a stick it round the corner type!

If your little one loves Batman then this play set is great. The different levels, the details, the light up elements, it all makes for a great set that keeps them busy for hours.

The DC Batman Mission 3-in-1 Batcave Playset is available from Amazon for £44.99.

The Launch and Defend Batmobile has had William in absolute hysterics. We haven’t laughed so much in ages – it is so fun.

The set comes with a Batman figure, the car and a remote control.

Inside the car is a seat, which is also a trigger button for the launch feature.

Push the figure down into the seat to press the button and then close the lid down and you are ready for the fun part!

The remote has 2 levers, one for backwards and forwards and one to turn left and right. It also has a red button in the centre that triggers the launch.

With the press of the button, out flies Batman. Honestly the first time he pressed it he was so shocked he screamed! Cue another 50 presses of the button and hysterical laughter each time Batman flew out of the car.

Of course the car is also a remote control vehicle and we’ve had a lot of fun racing it around the house.

And the fact that the car is rechargeable! Nothing worse than having to replace batteries every 5 minutes!

If you have a child that loves cars as well as Batman then this would be the ideal gift. It has given us so many laughs and joy!

The Batman Launch and Defend Batmobile is available from Amazon for £29.99.

Both toys work together to create a whole Batman world of play. So much fun – the perfect toy for any child who loves small world play.

We were sent press samples of the toys in return for our honest opinion. All words and thoughts are my own.

Planning for Christmas ✨ I know some people hav

Sometimes you just need to get out before you suff

It is so hard to make the time. Always something t

ᵃᵈ Getting outside is so good for mental healt

Just because I needed to hear this today and figur

Inside: A review of Ryder's Alphabet Tablet and Count with Marshall. Includes Press samples. William has been a fan of...