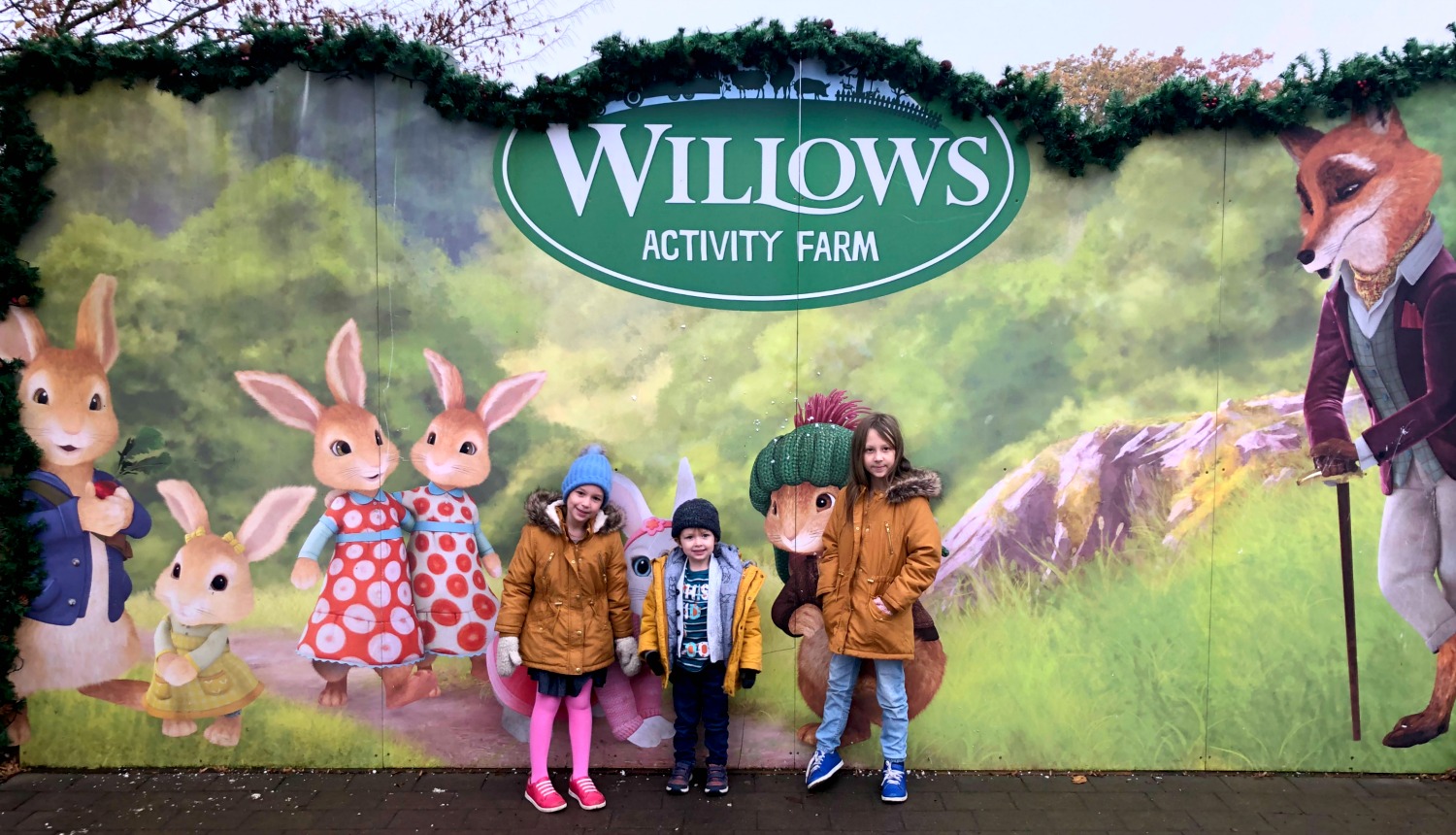 Inside: Our visit to Willow’s Farm Santa Spectacular – press trip

We love Christmas and love to get into the spirit by going to visit Santa. We have been to various events over the years and seen a whole host of magical grottos but one of the very best has to be Willows Farm with their Santa Spectacular.

One of the reasons I love it so much is that there are so many different activities to do throughout the day that you don’t need to worry about trying to fit anything else in during the season.

Our day at the Santa Spectacular

The gates open at 10 am and if you get there within the first half-hour or so you get greeted by Santa’s elves. They are hilarious, have little elf noses and pointy ears and bring the magic to life immediately.

Of course, you can’t go to Willows Farm and not say hello to Peter Rabit who lives there with his sisters, Benjamin Bunny and Lily Bobtail. William was overcome with excitement at meeting his favourite character that he hid with daddy while the girls went for a cuddle.

While other grottos have massive queues, you don’t have that problem at Willows as there is so much else going on to spread everyone around the farm. We still wanted to head straight there though as they were so excited to meet Santa.

I’m not sure I’ve ever seen such a beautifully decorated grotto. They’d excelled even from previous years. The devil is in the detail and honestly, they had thought of so much.

The photos don’t even do it justice. But the only way I can describe it is that you know it looks magical but you can’t pinpoint the one thing that makes it. But if that thing was missing, you’d have a basic grotto.

I mean who makes a multi-tiered Christmas tree at a fairground? It is gorgeous!

After wandering past the amazing displays we were greeted by 2 elves. They stamped our elf passports and took us to meet the man himself.

We aren’t allowed to take photos with Santa as they take them for you. But it is every bit as magical as you could hope for. Again, his little room is filled with details that make you feel as though you are in the North Pole.

Santa gives you magic keys that will allow you into his workshop. Each child is allowed to pick any toy they wish – Grace chose a colour-your-own bag, Lily chose a puppy in a carrier and William chose a truck.

As you leave the workshop you get a chance to view the photos from the grotto. We bought a photo last time and as much as I love it, it doesn’t do anything. So this year I decided to get a Christmas tree decoration with the photo inside instead. I can’t wait to hang it on the tree!

Next up was a ride on Tristan the Tractor – a must-do for any farm visit!

The children were given musical instruments and they laughed all the way around the track!

A yearly tradition of ours is to make magical reindeer food ready to sprinkle outside on Christmas Eve.

They have a self-serve station to mix oats, seeds and magic elf dust. The kids loved it!

Next up was colouring and writing letters to Santa. None of mine knew what they wanted to ask him for but by the end they had some lovely ideas and popped them down on their letters.

You can put your address at the bottom so that Santa can send them a reply in a few weeks. Last time we did it they were thrilled at getting a response from him!

Are you getting an idea of how jam-packed the day is yet? The first time we went we arrived slightly later in the day and had to rush to get everything done. This year we made sure to arrive at 10 on the dot!

I don’t remember doing this in previous years but we were treated to gingerbread decorating. William was more interested in scoffing sweets but Lils and Grace wanted to perfect their gingerbread men before gobbling them down!

When you arrive at the gate you are given tokens for visiting Santa, making gingerbread men and finally for making a Build-A-Cuddle cuddly! The kids were so excited about this and this year they have a selection to choose from. Grace chose a wolf, Lily chose a pink reindeer and William chose a blue dog.

I can definitely recommend saving this till last as you don’t want to be carrying them around for the whole day.

Although they wouldn’t have minded I’m sure!

The very last thing we did was to head to the ice-rink for a quick skate.

It isn’t real ice so it isn’t at all slippery but they still provide penguins for the unsure to balance on.

William wasn’t interested in skating so he went to have a ride on the tractors next door. Probably the highlight of his day!

As well as the activities, there are plenty of shows to go watch. You can go watch the elves get up to mischief, see Peter Rabbit and his friends and have a Christmas sing-song plus lots more.

There are meet and greets with the rabbits, the reindeer and Mischka the husky. Plus of course, you can try and catch those cheeky elves for an elfie while they aren’t on stage.

There is also a 3D cinema experience – perfect for even the little ones as the film is only 8 minutes long. William was mesmerised – he has never seen a 3D movie before!

Won’t lie, we were all exhausted by the end of the day but all full of the Christmas spirit. Such a great way to welcome the season and one to add to happy memories for years to come.

If you are looking for a magical way to spend the season then I can definitely recommend a day at Willows Farm for their Santa Spectacular.

We were gifted press tickets for the event but all thoughts and words are my own.

One thing I really struggle with is doing nothing.

And that includes you telling yourself otherwise.

#EasyMamaStyle —— Is it just me that has a spl

Take me back to the beach! —— I’ve been feel